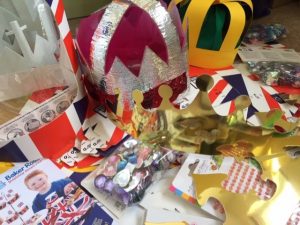 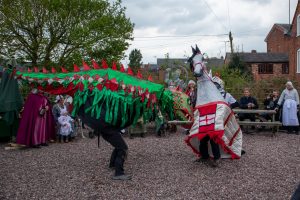 The 2013 Lantern Procession was again part of the Ellesmere Winter Festival.

Fizzgigs had commissioned inspiring  sculptural lantern artist Sophie Handy to run four community lantern making workshops in the Market Hall as well as workshops with students in Lakelands Academy. These workshops were free and open to all ages so everyone could come and make a beautiful traditional lantern to take part in the parade.

The lantern procession greeted St. Nicholas as he made his way into town on his ‘fantastical vessel’.  He then paraded through the streets of Ellesmere led by merry music of The Fizzgigs Street Band.

St Nicolas, the patron Saint of Sailors, led our procession, and so we had chosen a nautical theme this year.  With our albatross lantern leading a flotilla of ships, boats and sea life to guide St Nicolas in his Fantastical Vessel through the town!  The Parade ended with an amazing Grand Finale where a giant lantern sculpture was raised by the albatross!

Click on any of the images to see the 2013 Winter Festival Lantern Parade!

We would like to say a big thank you to Ian Wright for being our Fizzgigs photographer.

We would also like to say a big thank you to our sponsors and of course everyone who helped with this year’s event. We’re sorry if we’ve missed anyone out as there were lots of people involved in the procession but some mentionable people are listed here, roughly in order of appearance.

St Nicolas’ arrival by narrow boat ~ Organised by Tony Lewery.  Thanks to Paul Higson for use of the Green Man narrow-boat and accompanying Piper, Steve Thomas.

St Nicolas ~ Played by Alan Clarke with costume designed and made by Mary Lewery.

Additional Help and Support
Thanks to ‘Altogether Ellesmere’ for their support of this event and use of the Market Hall.  Thanks to Mike Jeffrey, Jackie Jeffrey, Becca Moore for their help on the night.